Are you superstitious? Do you love to cook or host dinner parties? We aren't and we do. We do believe that anything that can be done to bring happiness, good luck, or good vibes into our lives is worth doing and generally fun. Food- or breaking bread together- is one of those great pleasures in life. Gathering with family and friends, sharing ritual, celebrating occasions, or ringing in the New Year are all experiences that give an opportunity to relax, savor and set good intentions. The following are some foods that are considered lucky to eat, the reasons behind that and delicious recipes to try. Then share with all you love!

This is an easy one and no recipe needed. We love these FROZEN! They have a pretty, frosty sheen when you pull them out of the freezer. As the clock strikes twelve, The Spanish and the Portuguese eat one to honor each month of the year. Down South they eat collard greens and black-eyed peas for the New Year. The greens represent dollar bills and the peas represent coins which ensures wealth in the year to come. According to About.com, "The practice of eating black-eyed peas for luck is generally believed to date back to the Civil War. At first planted as food for livestock, and later a food staple for slaves in the South, the fields of black-eyed peas were ignored as Sherman's troops destroyed or stole other crops, thereby giving the humble, but nourishing, black-eyed pea an important role as a major food source for surviving Confederates." Bobby Flay is a constant winner. With over 5,000 5-star reviews (we love it too) his recipe is simple and can be made ahead. Collard Greens with Black-Eyed Peas In many Asian countries it is customary to eat long noodles-which signify longevity- on New Year's Day. You don't want to break your noodles during preparation so typically it would be made into a stir-fry. One of our favorite blogs is The Kitchn. Great recipes, tips, photography and all very user friendly. Their tutorial on How To Stir Fry Noodles breaks it down for you- however SKIP the step on why you should cut your noodles. DON’T cut the noodles for your good luck/New Year’s recipe. You want them to remain long, remember longevity. Believed to resemble Roman coins, the Italians are known to eat lentils on New Year’s Eve for wealth and prosperity. Pork-which is rich and fatty-also symbolizes this abundance. We love a dish similar to split-pea soup with ham (and made with Mama’s Little Helper the Crock Pot!) called Slow Cooker Lentil and Ham Soup. Inexpensive and easy, throw it together in the morning and come home to a delicious- and lucky- meal. 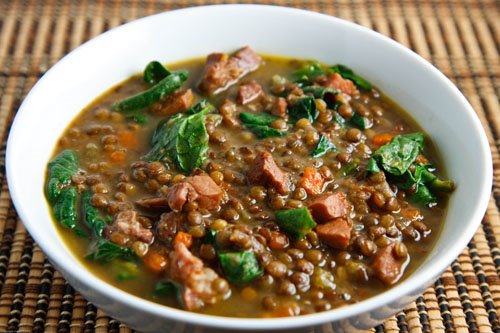 Here at FH we wish you the best of luck and the ultimate in spiritual prosperity in the New Year!